Sao Paulo, March 25th, 2014 – The NETmundial – Global Multistakeholder Meeting on the Future of Internet Governance – totaled 188 content contributions received from 46 different countries. The documents, which will sustain the discussions held during the two days of the meeting, were sent by representatives of civil society, the private sector, academy and the global technical community, containing considerations concerning the two topics that will be covered: “Internet Governance Principles” and “Roadmap to the future evolution of the ecosystem of Internet governance”. Content contributions were received until March 7th.

The countries with the largest number of content contributions are: United States (31 contributions), Brazil (16), United Kingdom and India (both with seven), followed by Switzerland, France and Argentina (both with six) and Japan and Sudan (both with four). The other countries that contributed were: Tunisia, Spain, Russia, Nigeria, New Zealand, Germany (all with three contributions each), Yemen, South Korea, South Africa, Senegal, Poland, Mexico, Kenya, Italy, Iran, China, Canada, Belgium, Australia (with two contributions each), Zimbabwe, Uruguay, Ukraine, Trinidad and Tobago, Sweden, Portugal, Norway, Mauritius, Malta, Malaysia, Kuwait, Côte d’Ivoire, Denmark, Republic of Congo, Colombia, Bulgaria and Austria (with one contribution each). 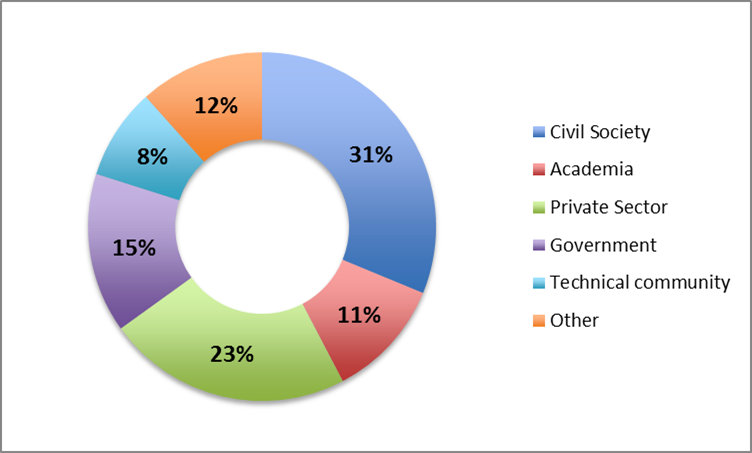 “We had 31% of content contributions derived from civil society and 23% from the private sector, which shows the multistakeholder aspect of the Conference,” says the chairman of NETmundial, Virgilio Almeida. “In other words, NETmundial is not a Government Conference, but a global event that brings together different stakeholders of society”.

Content contributions received by NETmundial cover various topics related to the Internet governance. From them we can observe the main concerns of participating stakeholders regarding the future development of this ecosystem. Among the subjects addressed in the texts received, there are: multistakeholderism (with 101 contributions), Human Rights (83), the role and responsibilities of the State (62), and users inclusion (also with 62).

NETmundial is organized in a partnership between the Brazil Internet Steering Committee (CGI.br) and /1Net, forum that gathers international entities of the various sectors involved with Internet governance. The meeting takes place on April 23rd and 24th, 2014, in São Paulo, Brazil, and will be broadcast live, as well as allow remote forms of participation, which will be announced before the event.

The Global Multistakeholder Meeting on the Future of Internet Governance will focus on crafting Internet governance principles and proposing a roadmap for the further evolution of the Internet governance ecosystem.  The meeting is scheduled for April 23rd and 24th 2014 in Sao Paulo, Brazil and will be live webcast enabling remote participation.  The meeting follows an initiative proposed by CGI.br and /1net. #netmundial2014

The Brazilian Internet Steering Committee, responsible for establishing strategic directives related to the use and development of the Internet in Brazil, coordinates and integrates all Internet service initiatives in the country, promoting the technical excellence, innovation and dissemination of offered services. Based on the principles of multilateralism, transparency and democracy, CGI.br represents a multistakeholder Internet governance model with the effective participation of all society sectors in their decisions. One of its formulations are the 10 Principles for the Governance and Use of the Internet (https://www.cgi.br/principios). More information: https://www.cgi.br

/1net provides an inclusive and open platform to discuss Internet governance matters for all those interested (individuals, governments, civil society, academia, technicians, and business). More information on how to participate: https://1net.org